With help and evidence provided by our Vet, we were successful in bringing a case of gross neglect and unnecessary suffering to sheep before a court. After receiving a complaint, we went to see the sheep, they were weak, distressed and were alive with maggots.

Under the supervision of our local police and with our Vets attendance, we were able to remove twelve of the worst affected animals that evening. The maggot infestation was the worst the Vet had seen in an animal that was still alive, they were days away from dying a painful, wretched death.

One ewe lay still, with her head on the floor, she was to be euthanised to put her out of her misery. The ewe lifted her head and looked into the face of the Vet, it was decided we would bring her home, she’d shown us that she wanted help and had the will to live. We named her Hope.

She survived, they all survived, they stayed calm and trusting while their wounds were dealt with, the rotting fleeces taken off. Many weeks later we had twelve bright, confident ewes. The scars in their memory had faded, although they’d carry the scars on their bodies for much longer.

The owner was banned for life from keeping animals, and we were able to rescue the remaining sheep. 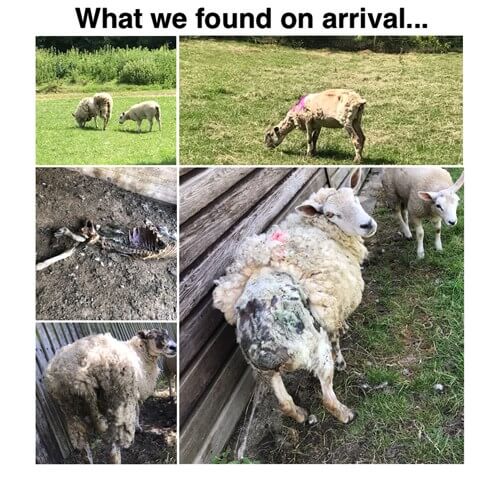 Early in January 2022 we were brought eleven sheep that were desperately in need of our help. These sheep were brought to us from a farm where the dead bodies of starved and infected sheep were removed on what we were told was a regular basis. The authorities had been informed multiple times, but no one had taken any action. We wonder how many lives had been lost before we were made aware of the situation.

Our Vet was called to examine them, she confirmed they were severely malnourished, they had the highest worm count she has ever seen in a live animal, and they were badly infected with sheep scab.

We lost one of the sheep that first night, we named him Paddy, but we were too late to save him. He had been found lying under a hedge unable to stand or even sit up. We gave him fluids, vitamins, and our sheep life saver, Golden syrup porridge. After being given a few syringes he began to take it himself, we all had hope that he would make it. We take some comfort knowing he at least left his life feeling more cared for than he ever had before, with a deep bed and a belly full of warm porridge.

Treatment for the remaining ten was slow and steady, cases like this can’t be treated for all of their ailments at once as they can go into shock. They were given wormers, injections, vitamins, food, salt licks, and the sweetest hay over the course of many weeks.

Slowly but surely their health improved, their once blank faces were full of life, their cheeky personalities began to shine. 3 months after they arrived, they were well enough to have their final treatment to rid them of sheep scab. They thrived, and when they were finally well enough to go out onto the fields of lush spring grass, they bounced higher than any other sheep we’ve ever known. 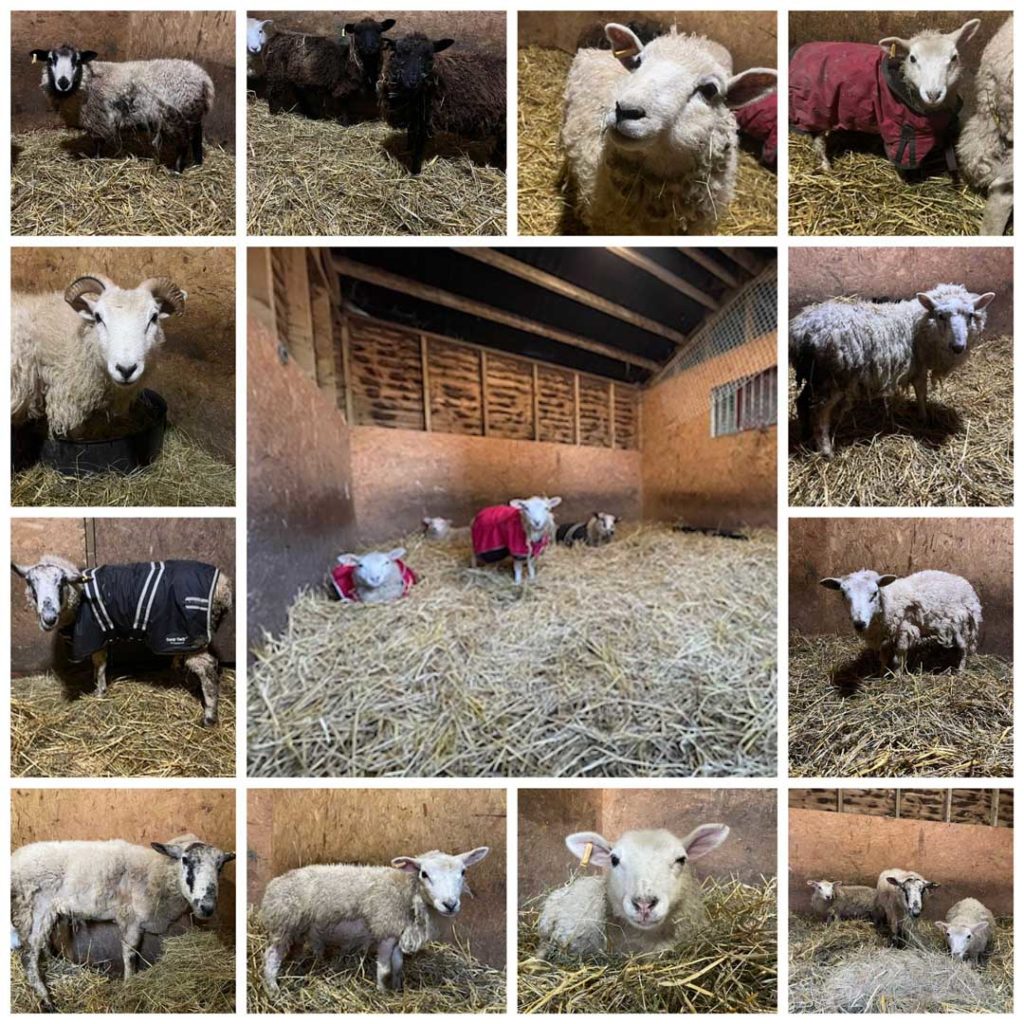 Jacqueline was put in calf when she was too young, she was suffering from malnutrition and struggling to give birth to her calf. Our Vet had to perform a caesarean with Jacqueline tied up by the side of the road, her field was just a quagmire, the cattle in there were dragging themselves around knee deep in mud. The owner was given no choice when we told him we were taking her and her calf back to the sanctuary. He had been reported on a regular basis for causing unnecessary suffering to his animals, nothing was done, he was told to try and do better.

Jacqueline made a full recovery and was able to stay here, in safety, with her calf Josephine. They have never spent a day apart and will never have to as long as they live. 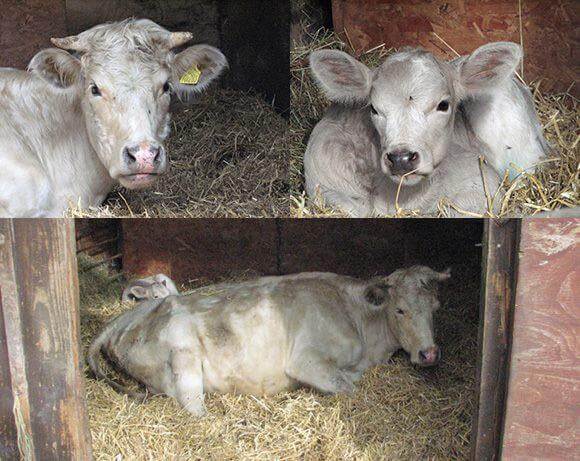 Found on the side of the M42 late on a Wednesday afternoon, just a few months old and unconscious. Council workers from a local depot carried him into the back of their van and returned him to their depot. A vet was called as he was in poor shape, the verdict was that he had fallen out of a trailer or some sort of vehicle, he was very badly cut and bruised, severely concussed and suffering from shock. They weren’t sure he would survive the night, so it was decided it was best to leave him overnight to rest and prevent further shock.

In the meantime, the RSPCA phoned a number of local sanctuaries, a home would be needed for him quickly if he survived the night. We seem to have been the only people to have picked up the phone that evening, and luckily, we had a space available. He was assessed as fit to travel the next morning, and so he arrived with us at the Sanctuary.

He spent the next few days recuperating, he was still sore and sleepy, we took him breakfast in bed and allowed him the time he needed to fully recover. He certainly isn’t the subdued pig that turned up that day – quite the opposite! He runs across his paddock to greet us every morning with a series of grunts and squeals, not so patiently waiting for breakfast! 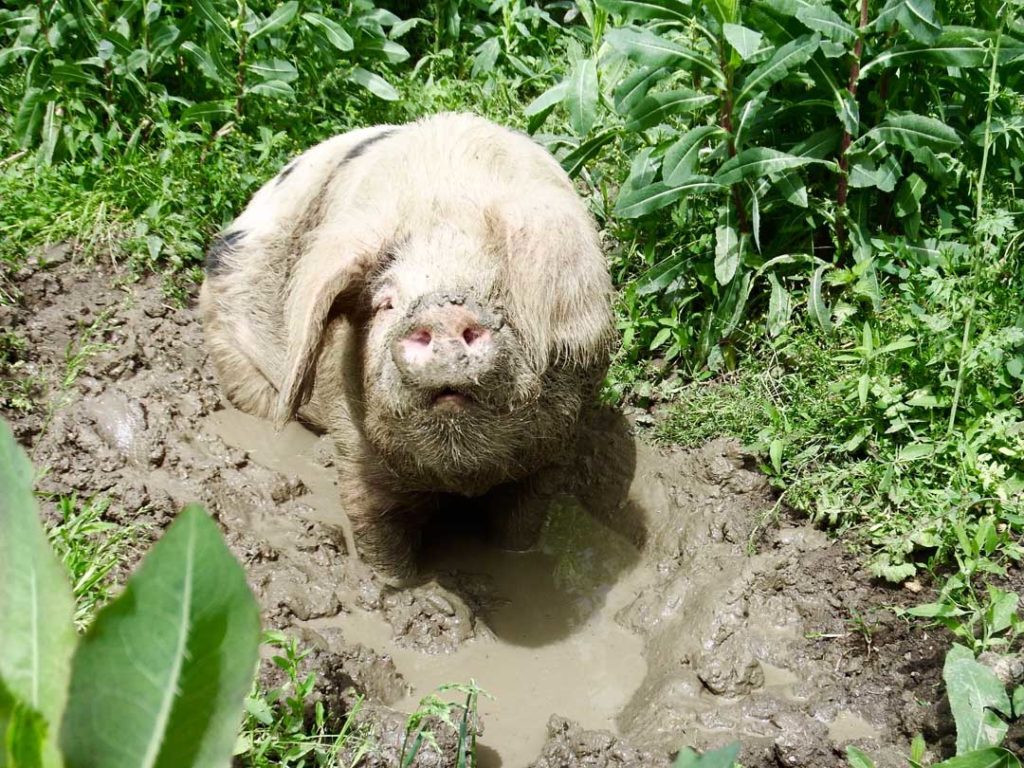 The abuse of animals, especially farm animals go on out in the open, it’s happening now, at markets, sales yards and on farms. There are so many other stories of animal abuse and their rescues that we could tell you, too many to count. Please do get in touch if you’d like more information, sign up to our monthly newsletter here, or pay us a visit and come meet them for yourself.

Contact us for more information on our animals or ways to donate.

Do you want to volunteer?

Would you like to volunteer or do your work experience with The Farm Animal Sanctuary? Click the link below and fill out our form and we will be in contact.